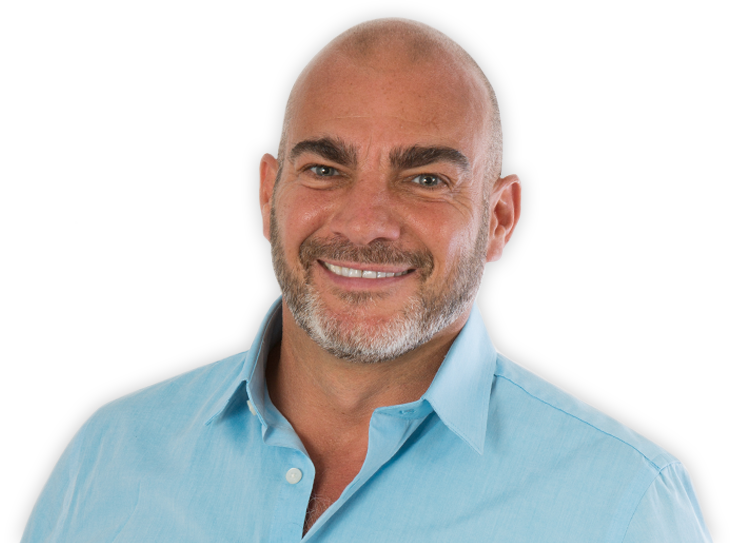 I grew up in a small village in the north of Italy. At the age of 20, I went to London to learn English. I very much liked it and stayed there. My life was never perfect for various reasons. I was curious by nature and liked to try new things. My family situation was not a very happy one so I started to drink and experiment with drugs quite regularly.

My mother was addicted to antidepressants and to alcohol. She was very depressed and once told me that her biggest wish was to die. It shattered the perspective I had about my life and future, I became fragile and depressed too. At the young age of 47, she died without having to commit suicide.

That was one more excuse for me to drink more alcohol and take more drugs. This led to two major car accidents in which I was not injured although I destroyed two cars. One fine evening in 2002, I took so many drugs that while crossing the road in London I got hit by a car. I smashed my head against the windscreen (which felt as if a brick had hit my face) and I fell on the pavement with shattering impact.

To my surprise, I was completely unharmed. I was completely clueless about what had just happened in a fraction of a second!
Two weeks after this accident while I was hanging out (it was early evening and I had not drunk any alcohol or taken drugs), a stranger approached me and told me that he was a Medium and had something important to tell me. It sounded funny at first and to my scientific mind, it was totally illogical!

He said there was a woman who could be my mother (this was six years after her death) who was communicating through him to say that she was fine and would always be there to help me in an instant like she had always done, but that it was time for me to change my lifestyle now.

Also, he told me to be careful from that day and for the next two weeks – not to drink and drive or get into cars with people who had been drinking. I never saw him again. He did not ask me for money but he left a piece of advice wrapped in a life-transforming revelation that I have cherished until today. That encounter literally changed my life.

Since then I have not grieved for my mother. I moved on. It became obvious to me that who we really are is that invisible, intangible something that pushed a man that did not know me to tell me what he did. I then literally looked up and said: “If there is something or someone out there who can help me out, I really want to change”.

I stopped taking drugs and drinking excessively and felt high on Life – as if I were taking the most powerful drugs I had ever taken! Living life happily literally became my drug, and I didn’t experience any withdrawal symptoms.

I felt so different. I believe it was because I opened myself to the possibility of Life being Eternal and to the existence of an Intelligence – a Power that I have been using ever since, a Power we all use even if we do so unconsciously.

I then started to look at everything that was spiritual in nature. I started reading books, attending seminars and workshops, I studied Metaphysics and become a Metaphysical Counsellor. I also studied psychology and became a Dr. in psychologist. I did it all in order to be able to help others overcome life’s challenges and discover who they truly are.

As I said, I opened myself up to a new dimension I had not considered before. Of course, I still had to work for what I wished for and I still have to, but the major fears, the source of anxiety and compulsions that I was feeling before, have disappeared. Soon after the event I felt so good that I made a pact with this invisible Intelligence, a Power that I experience regularly.

I promised that I would do whatever it took to remain in that state of consciousness naturally and that I would like to do something with what I had found to help others realise and feel the same. I now help others to realize the infinite potential that they have at their disposal and how to use it to live as happily as they wish.

This has become my mission and vision.

This website uses cookies to improve your experience while you navigate through the website. Out of these, the cookies that are categorized as necessary are stored on your browser as they are essential for the working of basic functionalities of the website. We also use third-party cookies that help us analyze and understand how you use this website. These cookies will be stored in your browser only with your consent. You also have the option to opt-out of these cookies. But opting out of some of these cookies may affect your browsing experience.
Necessary Always Enabled
Necessary cookies are absolutely essential for the website to function properly. This category only includes cookies that ensures basic functionalities and security features of the website. These cookies do not store any personal information.
Non-necessary
Any cookies that may not be particularly necessary for the website to function and is used specifically to collect user personal data via analytics, ads, other embedded contents are termed as non-necessary cookies. It is mandatory to procure user consent prior to running these cookies on your website.
SAVE & ACCEPT